We tried the new MSI Optix MAG272CQR, a curved monitor dedicated to gaming, which unexpectedly proved to be capable even in productive use.

Rich enough packaging for this MSI monitor, which for once doesn’t skimp on the cables you might need. HDMI, DisplayPort and USB-A to USB-B to take advantage of the hub functionality and use PC software. There are also 4 screws for fixing to the wall, but the plates and other accessories needed to hang the monitor on the wall are missing.

MSI Optix MAG27 mounts very easily. The screen is made of plastic, but with some care also for aesthetics. On the back, we have altering shiny, knurled and speckled parts, which are always pleasant to the touch. The large radius of curvature of 1500R is also well done and there are no obvious gaps between displays and bezels. Speaking of bezels, those on the side of the monitor are about 0.8mm, as is the upper one. Not reduced to the minimum terms, but still rather contained, even if in a multi-monitor configuration you will certainly notice them. On the left side, there is also a removable headphone holder.

Just screw a couple of screws on the back and tighten the base: in a minute, the monitor will be ready on your desk. We really appreciated the stability of the monitor. It is more rigid than the average and tends to wobble less, perhaps following a heavy writing on the keyboard present in the same desk. It can be adjusted in height, with an interval of 13 cm, and inclined between -5 and +20 degrees. However, it cannot rotate along its axis, nor can it be brought to a vertical position (also because, as the monitor is curved, it is not really intended to use it in portrait). These two last shortcomings are probably the ones that give him even greater rigidity, which we honestly appreciate more than an occasional rotation.

The metal base has a triangular shape, and is well planted on the desk. The stand is instead covered in knurled plastic, and has a hole in the center that can be used for a bit of cable management.

There are 3 types of controls: power button on the bottom right, programmable button on the bottom left, and joystick on the back on the right side, for quick access to all settings. Always behind are all the ports present: 1 USB-B, 2 USB-A and a USB-C, as well as 2 HDMI 2.0b and a DisplayPort 1.2a. A 3.5mm audio output completes the equipment. So we have four different video inputs in all

There are no speakers, a detail that we do not even consider a defect, given the often poor quality of the speakers present in most monitors.

Also on the back, at the top, we have a multicolor LED strip, which MSI calls Mystic Light. These perform best when combined with other accessories from the same company, including motherboards and graphics, to create a desktop build with synchronized lighting. In any case, even on its own, the power of these LEDs is felt, especially in dim light and with the monitor placed in front of a wall. If you do not need / want it, you can still disable them through the appropriate software. 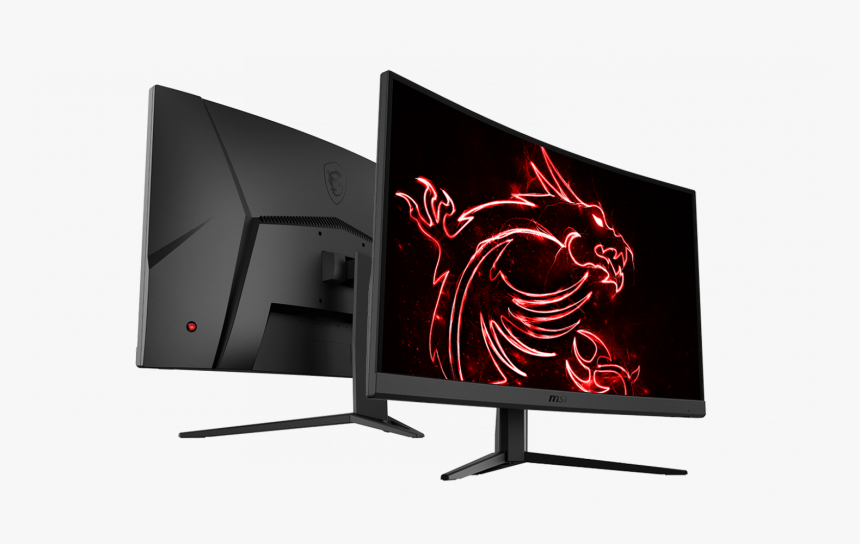 There are various strengths in this MSI Optix MAG272CQR, which the company is keen to reiterate with the classic stickers on the body. Let’s start from the latter to understand what this monitor is made of.

Bending radius 1500R, one of the widest among those on the consumer market. It is enough to make the use of a 27″ comfortable (but also something more, if desired) on a desk. If on the one hand, in fact, the curved televisions have not broken through, in the field of monitors, where perhaps the user is sitting less than a meter away from the display itself, the curvature acquires greater meaning, especially when it is well done as in this case. In fact, there are no halos, color losses or compromises to be accepted following the curvature, and as already mentioned also from the constructive point of view the monitor does not show any smudges.

The resolution is WQHD, 2560 x 1440 pixels. Not reaching 4K may not be a cross in a purely playful environment, where a very powerful machine would also be needed to exploit it. The compromise is probably due to the desire for a high refresh at 165Hz (only via DisplayPort, via HDMI it stops at 144Hz). There is in fact another monitor of the Optix MAG series with higher resolution, but fixed at 60 Hz. In an out-out between refresh rate and high resolution, in our opinion the first wins, especially in terms of gaming (but also only for the greater part rest they give).

Then we have the response time of 1ms, which is even more remarkable on a VA panel. Through the settings it is still possible to adjust it, even if we would have preferred a precise indication rather than a generic “normal, rapid, faster”.

Speaking of OSDs, we are very fond of both how they are organized and graphically. You can also have the same controls through the GamingOSD software for Windows and Mac, which among other things also allows you to customize the “G” key on the left, which is not possible by passing only through the controls via monitor. For the rest, the two solutions are almost the same.

Other noteworthy elements are the night vision mode, adjustable on 3 levels of intensity plus a quarter assigned to AI. In practice, this mode decreases the contrast in dark areas, so as to allow you to see better in the shaded areas, not to be caught unawares by some enemy hidden in the dark. It may prove useful, but it is a bit “cheating” in my opinion, in addition to the fact that its use is intended to be purely playful, because in any other scenario only the image fades. The only sensible way to use it can be to set it on the macro button above, pity that once activated it must be deactivated manually by going through the settings, since a second press of the same button will have no effect.

We also have an alarm function, which activates a customizable on-screen timer. We also report that freesync can be deactivated from the settings and that the monitor is also compatible with AMD AdaptiveSync (as long as you have an AMD GPU to take advantage of it). If instead you had a G-Sync compatible NVIDIA card, despite the fact that the company has not yet included this monitor in the list of compatible ones, and contrary to what is shown in the video, we can tell you that the G-Sync it works (but only via DisplayPort). Tearing therefore becomes a problem that does not exist: there are no jerks, the synchronization of moving objects is perfect and the artifact effect is a thing of the past.

Other noteworthy features are the blue light filter (here called eye saver), which however is a bit aggressive and not adjustable. We also have an anti-motion blur (which can be deactivated) that has not convinced us too much (like most anti-blur effects), and an HDCR function that automatically optimizes the contrast (even if it honestly doesn’t seem to make a big difference). Speaking of which instead of HDR, MSI plays around with the terms here, talking about HDR Ready. There is in fact an HDR mode in the settings, which in practice forces the maximum contrast and “cancels” the shadows, like a normal color profile of the monitor, which, however, in fact remains 8-bit.

We also have an image enhancement function, adjustable on weak, medium, strong and stronger, which acts above all on the sharpness of the image, with unpleasant effects on fonts already with medium profile. In short, to be used only in special cases. Finally, we point out the possibility of setting various types of sights (12 different ones) in the center of the screen (or in a position decided by the user via software).

There are obviously various preset calibrations. For games, we find FPS, Race, RTS and RPG, while for “professional” use we have player, cinema, designer and HDR. In both cases, the possibility remains to adjust the image on a user profile, where you can customize the contrast, sharpness, and color temperature for the individual RGB channels. In general, however, the monitor leaves the factory with a good calibration. The delta E remains lower than 3 on both grays (2.1) and colors (2.72), and all with good sRGB (100%) and Adobe RGB (85%) coverage for a monitor of this type. Good also the maximum brightness, which reaches 320 constant nits.

The monitor is in fact pleasant in any situation, with vivid colors that are not overly saturated or contrasted. For some content, especially video, cinema mode is recommended, which softens the tones and warms up the colors a little. Too bad that in the quick settings there are only the gaming presets and not the professional ones. Also good viewing angles, close to the flat angle, which sin a little just looking at the monitor from above. Below are some screenshots captured with CalMAN as evidence of what has been said.

Despite the numerous inputs, however, there are no picture-in-picture / picture-by-picture features. Particularly strange, because other monitors of the same series are equipped with it, and that maybe it will be solved with a software update. Finally, we point out sporadic problems in switching from one input source to another: sometimes the screen remains black a little too long, sometimes the source is not recognized; easily a problem of the single model under test.

MSI Optix MAG272CQR is a nice gaming monitor, with all the right requirements. Good factory calibration, good behavior of the panel from a playful and also multimedia point of view, good brightness, and well-made and pleasant curvature from 1500R. With a few small tweaks to the settings and the management of the quick controls, it could become almost perfect.